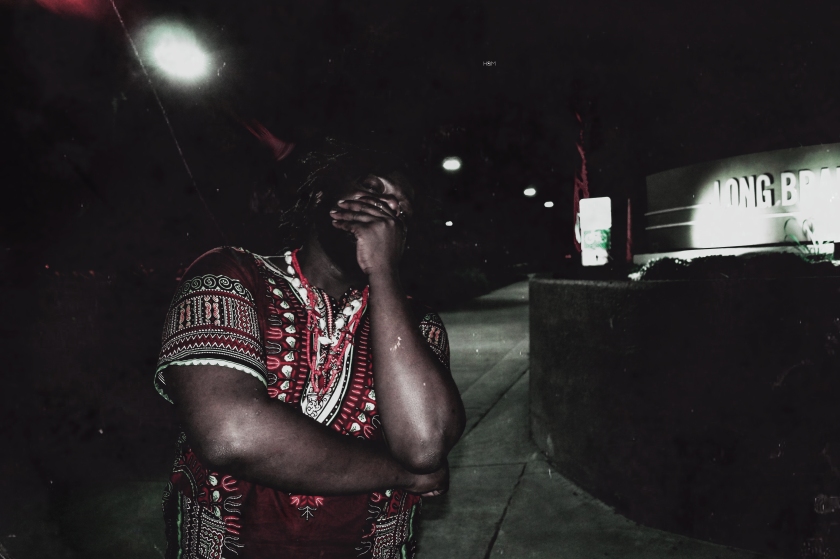 1. First and foremost, Where are you from? and what got you into music?

I’m originally from Charlotte, NC but I was born in The Congo. Music has always been apart of my life before I even knew what it was. Africans are big on music whether it be dance or the sound of a drum. no matter what the intention is there was always melody around. My cousin & I use to pretend to play drums when we were younger so the love of music was always there. I use to write poetry a lot too so I always had a love for self expression. In middle school when I started smoking weed It was what we did in sessions. back then I used to just listen because I didn’t have the confidence yet. But once I started high school I started Free-styling in the cyphers before class and everybody always used to tell me I needed to write stuff or record it because I always had witty lines. Then an old friend I used to know gave me a news reporter microphone and I started recording. But 2015 is when I started taking it serious. Before then it was just therapy and something to do with my friends.

2. What are some noteable names that you have worked with or wish to work with in the future?

I’ve worked with Mick Jenkins Chuck Strangers & Joel Venom. I’ve met a lot of people I listen to but the only ones I want to work with is Ab soul, FBZ, UA, A$AP 12vy, Joey Bada$$, Erykah Badu, & Schoolboy Q. I say those 7 because I see myself in the people I want to work with. My music is different & versatile and in a Collab I love it to be unforced, organic, & natural. The sound has to be cohesive. That’s why I don’t have a long list because it’s the feeling I go for, not so much the name.

3. Who or what is your main influence when it comes to music?

My main influence for my music comes from outside of music. Of course I have artists I love but I was inspired by OSHO. His books changed my views on the world and he helped me help myself in a very dark time in my life & I think about his words daily. Musically I have 5 artists who inspire me for various reasons. Bob Marley because his message of love and peace transcended music but his wisdom was reflected in his lyrics simultaneously, and his reverence for GOD was very evident. I respect that. Sade because she expressed emotions People usually suppress and made it beautiful like sadness for example. Her sound is incredibly soothing and she didn’t let the fame change her. She dropped albums and disappeared to live life.  2pac because he had so many elements to his being and was so genuine On or off the mic. He wore his heart on his sleeve. I admire that. Erykah Badu because She is unapologetically herself and a true mystic. Capital Steez(LongLiveSTEELO) because his bars were witty, lyrical, & he made you think about things that Society doesn’t want you to think about. All these artists make you FEEL. That is why they inspire me.

4. Would you say it’s harder or easier being an independent aritst / music producer?

I feel like there are pros and cons to both sides of the spectrum it just depends on your perspective. I personally feel it is a lot more unforgiving but more rewarding to be an independent artist but I feel a little help from the label won’t hurt as long as you have the right contract.

5. What’s mixtape or album are you working on at the moment?

At the moment I’m working on a collaborative album between Myself and Wichti, a producer from Europe that has produced a few of my songs. We have a great chemistry because his sound is divergent.

6. If you could improve on any area of your career what would it be?

If I could improve anything it would be my promotional team. Not even for recognition or anything but I want to get my music out to as many people as possible because I aim to inspire hope and you never know who needs it. Plus as an artist, you want your music appreciated and I know my music is for a certain type of audience. I would improve my promotional team. But regardless I’m still grateful.

7. Where can your fans or the people reach you at to find your music?

My fans can reach me on twitter and Instagram @AcidTripTamo I’m not much of a Facebook person. I’ve tried it over and over and it’s just not for me. But I’m on all platforms just look up AcidTrip-NaZaLee or AcidTrip-LAZULi on google.im on Spotify tidal

8. Anything else you that you didn’t want to leave out?

I appreciate the love from you guys HQM. It’s been about 2 years since we met but you’ve stayed true and been Rockin with me so I just wanted to say Thankyou for everything and all the opportunities.